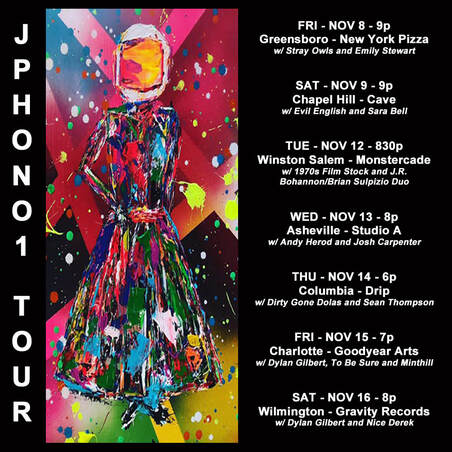 “Loblolly Boogie” feels a bit like a return to the form of the earlier, psych-folk records in the Jphono1 canon, but this isn’t to say it’s retreading old ground, more like visiting with an old friend. Where, years ago, Jphono1 songs would be filled up with layers of sounds intended to add depth to the tunes, the tracks on “Loblolly Boogie” are content to have space and separation in the parts. Instead of trying to fit in every word and catch up, they are content to sit on the porch in each others company, even if that means the only thing filling the silence is the creaking of swaying pines. Anyone who’s sat and listened knows that, sometimes, that’s the best music, anyways.

Drop the needle, shut your eyes, and you can almost see the clouds forming behind your lids on the opening track, “Where Clouds are Born”. Bubbling keys and wavering slide guitars envelope steady takoma pickings while Harrison’s voice creeps through the haze briefly singing “High above where clouds are born, steal away into the morn, everything that’s here is awake.” The groove soon dissolves into a tv grey static, and becomes a cloud of its own. “The Land Beyond” verges on unplugged grunge full of clattering percussion and a drop-tuned riff that would make the flannel clad nod their unshorn heads in satisfaction. Speaking of long hair, “I’ve Let All My Hair Grow” is the thesis statement of the record, packing in pop sensible melodies, meandering leads, and a looping coda all in a three-and-a-half minute package that leaves you sated, but wanting to make room for more.

After two consecutive full band releases featuring the Triangle all-star rhythm section known as the Chevrons, John Harrison returns with a (mostly) solo effort in Jphono1’s “Loblolly Boogie”. Where the previous Chevron records channelled the energy of a lysergic sweet tea and bourbon fuelled jam band, “Loblolly Boogie” mellows out a bit, but doesn’t sacrifice the artisanal cosmic grooves that have become a Jphono1 staple.

​Accompanying the physical format of “Loblolly Boogie” is an expanded lyric sheet and photo album book featuring the titular conifer. Through images both organic and effected, photographer Kevin Clark depicts the mighty loblolly in all seasons and states, and isolates various aspects of the trees anatomy au natural and more purposefully arranged. With a sleek design courtesy of Regina McCoy, this book provides a perfect companion piece to the record, the visual metaphors within mirroring the sonic analogies on wax. Both pieces of art are a rumination and reframing of what we take for granted. A sunny day outside among the pines can be transcendent, if you let it.
"...the earthy slide guitar and Indian tunings of Led Zeppelin III; the pastoral, sighing melancholy of mid-period Pink Floyd; the "pretty daze" sensibility of Kurt Vile and the War on Drugs. Harrison's bemused but reassuring authority, exquisite taste in riffs, and ability to write lyrics that suit the celestial sprawl of the music convey just the right amount of trippy wisdom."
Indyweek

"Harrison’s playing seems to borrow from American Primitive and some of the more lush layers of Ben Chasny or Steve Gunn to take these songs in surprising places, and the band behind him locks in with a swampy thump, as if Gram Parsons’ Cosmic America took through Appalachia."
PopMatters